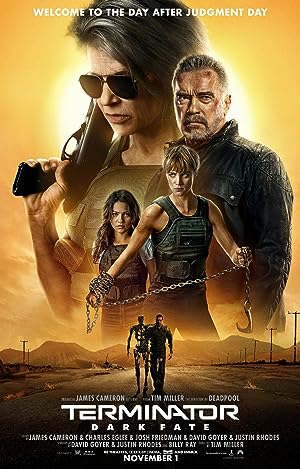 Sarah Connor and a hybrid cyborg human must protect a young girl from a newly modified liquid Terminator from the future. As the Rev-9 ruthlessly destroys everything and everyone in its path on the hunt for Dani, the three are led to a T-800 from Sarah’s past that may be their last best hope.

Dani Ramos is living a simple life in Mexico City with her brother  and father when a highly advanced and deadly new Terminator travels back through time to hunt and kill her. Dani’s survival depends on her joining forces with two warriors: Grace, an enhanced super-soldier from the future, and a battle-hardened Sarah Connor.

Terminator: Dark Fate is a 2019 American science fiction action film directed by Tim Miller, from a screenplay by David Goyer, Justin Rhodes, and Billy Ray, from a story by James Cameron, Charles H. Eglee, Josh Friedman, Goyer, and Rhodes. Cameron also produced the film alongside David Ellison. It is the sixth installment in the Terminator franchise, and acts as a direct sequel to The Terminator (1984) and Terminator 2: Judgment Day (1991), while retconning other related works such as Terminator 3: Rise of the Machines (2003), Terminator Salvation (2009), Terminator Genisys (2015), and the television series Terminator: The Sarah Connor Chronicles (2008–2009) from the canon, following the return of creative control to Cameron.