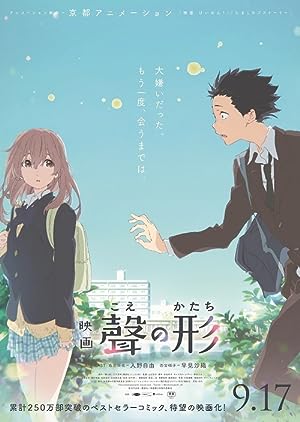 The story revolves around Shoya Ishida, a former delinquent who bullied Shoko Nishimiya, his deaf classmate, alongside his friends back when he was in elementary school. When Nishimiya transferred, all of his friends and teachers turned against him, making him isolated well into high school to the point that he decides that there is no point in having friends. Having no plans for the future, Ishida even contemplates on committing suicide until he suddenly reunites with Nishimiya, who is still lonely due to her shyness. Realizing that both are suffering due to his past sins, Ishida sets out on a path of redemption by trying to reconnect Nishimiya with their old classmate.

A Silent Voice: The Movie (Japanese: 映画 聲の形 Hepburn: Eiga Koe no Katachi, also translated as The Shape of Voice: The Movie) is a 2016 Japanese animated teen drama film produced by Kyoto Animation, directed by Naoko Yamada and written by Reiko Yoshida, featuring character designs by Futoshi Nishiya and music by Kensuke Ushio. It is based on the manga of the same name written and illustrated by Yoshitoki Ōima. The film premiered in Japan on September 17, 2016, and worldwide between February and June 2017.